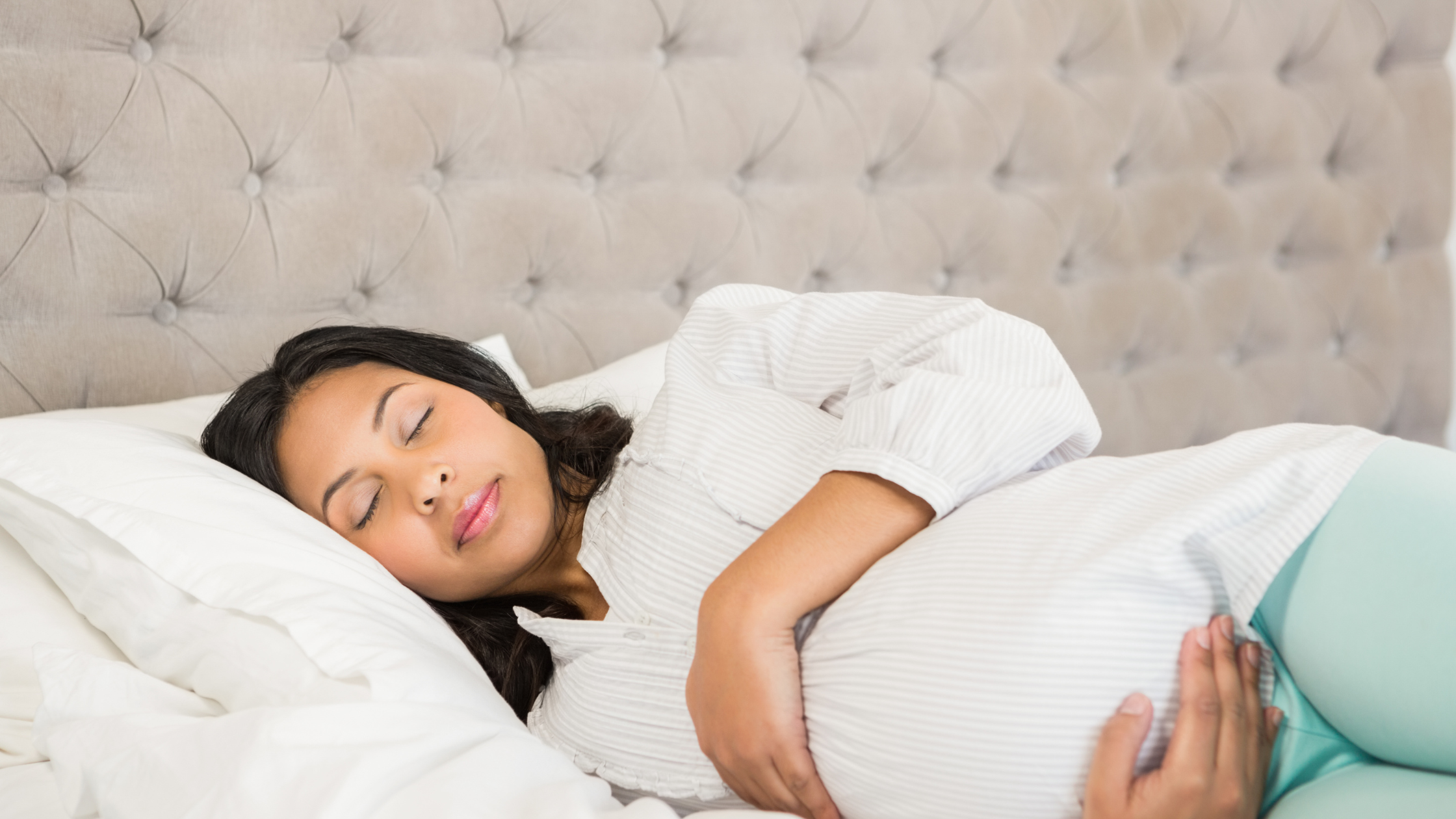 Pregnancy can drastically change the body. There are many new conditions that can appear when someone does become pregnant. These include conditions such as indigestion, heartburn, to extreme fatigue and trouble sleeping. For some, about 14% to 53%, pregnancy can also come with snoring. This snoring can become more frequent as the pregnancy progresses and the woman becomes bigger. You may be wondering why snoring increases over pregnancy and when snoring may actually be indicative of an underlying issue. Continue reading to learn some of the answers to these questions about snoring, like what causes snoring and when to be concerned.

Common causes of snoring during pregnancy

There are both hormonal and physical changes when someone becomes pregnant, which can make it easier for someone to begin snoring. Factors that increase the risk of snoring, especially later in the pregnancy, include weight gain, hormone changes, blood flow, and other risk factors. Snoring is caused by muscles in the back of the throat relaxing, narrowing the space that air has to pass through in the back of the throat. This leads to the tissues vibrating and causing the sound of snoring.

Weight gain is a part of pregnancy, and weight gain really takes off during the final two trimesters. People who have extra weight are at higher risk for snoring due to the more tissues surrounding the back of the throat. This leaves smaller area for air to pass through as the muscles continue to relax and collapse during breathing, and the snoring.

There are also fluctuations in hormones such as estrogen and progesterone. These changes have widespread effects during pregnancy. Hormonal changes can cause a buildup of fluid and the nasal passages which can reduce the amount of space available for breathing. This can also increase the risk of nasal congestion which can further constrict breathing and lead to a higher risk of being a snorer. These changes only progressed throughout the pregnancy, which increases the risk of snoring in later stages.

The body increases blood volume when someone becomes pregnant in order to provide adequate blood for the fetus. This increase in blood flow can lead to reduced nasal passage space, increased congestion, making it much more difficult to breathe through the nose. These changes can be further exaggerated when someone who is pregnant lies down.

Should you be concerned about snoring while pregnant?

About half of pregnant individuals develop snoring. Researchers are continuing to look into whether or not snoring has any impact on the fetus. Snoring has been linked with several conditions that can affect maternal health, however, during pregnancy. Snoring during pregnancy can be a sign of sleep apnea, which is a condition in which a person stops breathing several times throughout the night, and has to wake themselves up to begin breathing again. This is caused by the same changes as snoring, however the blockage becomes complete to where no breathing takes place. This is called obstructive sleep apnea and is more common in those who are overweight or obese.

Is snoring becomes problematic for you or your bed partner, there are things that you can do to reduce your snoring while you are pregnant. One thing is to change your position and sleep on your side. Snoring is often the worst when someone is sleeping on their back, particularly in the later stages of pregnancy when the baby is very large. Sleeping on the left side can actually reduce the risk of disrupted blood flow and pressure on organs. You can also elevate your upper body which can help keep your airway open during sleep.

Nasal strips are thin saline washes, and nasal dilators that are designed to make it easier to breathe through the nose at night. This can help reduce snoring if nasal congestion is the cause.

It's also important to maintain a healthy weight throughout your pregnancy. The average weight gain during pregnancy is anywhere from 25 to 30 pounds. This number changes based on your prenatal BMI, if you were smaller then you will gain more weight and if you were larger than you should gain less weight. Keeping a healthy weight is not only important for your own health and the baby's health, but can also reduce your risk to the breathing problems while you are asleep.

Continue practicing positive sleep hygiene. Getting adequate sleep can prevent being overly tired, which can be a risk factor for snoring and sleep apnea. You can try various habits such as napping earlier in the day, but make sure to limit your naps to no longer than 30 minutes, and only in the early afternoon. It's also important to avoid caffeine later in the afternoon as well. Not only is alcohol and smoking bad for the pregnancy, but both can also increase your risk for snoring. So it's essential that you abstain from these substances both for fetal health and for your ability to get a good night's rest.