The Link between Sleep Apnea and Heart Disease 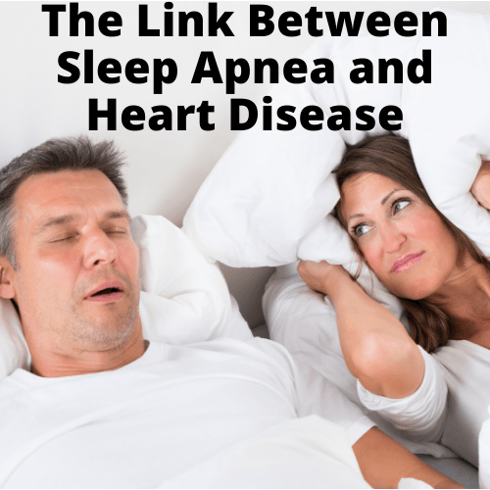 Sleep apnea is a sleeping disorder that consists of many pauses in breathing throughout the night. This pause can lead to several sleep disturbances as your body has to wake you up again to start breathing. Sleep apnea is more than a sleep disturbance, however. It can have tremendous effects on health in a variety of systems, including cardiovascular health. Continue reading to find out more about this relationship and what you can do.

What is sleep apnea?

Once the body realizes that you have gone several moments without sleeping, then it will wake you up to start breathing again. This can take the form of gasping, coughing, choking, and startling breathing throughout the night. You won't remember these instances, but your partner will, and this can be disturbing to both their sleep and their concern for you safety.

You, on the other hand, will wake up feeling tired and unrested. You also may experience excessive daytime sleepiness which can interfere with your attention, focus, mood, and overall temperament. Sleep deprivation can have profound effects on your overall health including not giving your body, including the heart and cardiovascular system, a chance to recover from the day's activity. This can further increase your risk for developing cardiovascular disease.

Sleep apnea has so many other impacts on your health, that it's important to consult your doctor if you're experiencing any of those health impacts.

Heart disease is the number one cause of death in the United States for both men and women of all ethnicities. This means that it is a widespread problem with a number of causes. Sleep apnea is one of them.

When you have sleep apnea, your lungs, as well as other body parts, are deprived of oxygen. This means they have to work a little harder which can put stress on them, as well as other nearby organ systems, including the heart.

Untreated sleep apnea can significantly increase the risk for heart arrhythmias (abnormal heart rhythm) and cardiovascular disease. It's estimated that individuals with sleep apnea are 2-4 times more likely to develop an arrhythmia. Sleep apnea can increase risk of heart failure by 140% and coronary heart disease by 30%.

Sleep apnea, obesity and heart disease are all interrelated and all increase one's mortality risk. Sleep apnea can cause obesity due to the lack of quality sleep and the hormonal disturbances. Obesity can also be a risk factor for sleep apnea as it increases the pressure on the throat during sleeping. Both obesity and sleep apnea impact the heart as the heart must work harder for long periods of time which can wear it out.

Add on top of this relationship the fact that poor lifestyle habits like smoking, poor diet, and inactivity, can increase the risk for developing all three of these diseases. It's important to be aware of these relationships and risk factors because they have such substantial impacts on overall health.

The repetitive cessation in breathing that is seen in sleep apnea can stress and potentially damage the heart and the entire cardiovascular system.

Activation in the sympathetic nervous system

However, the deprivation of oxygen the body experiences throughout the night alerts certain cells in your body that it needs to turn on certain systems to increase the amount of oxygen - thus activating the sympathetic nervous system. This is what causes you to gasp for air and wake up you and anyone else in the room.

The other way that sleep apnea can affect the cardiovascular system is with the changes in pressure within the chest. Anyone who has OSA is trying to inhale against a narrow or closed upper airway. These forced inhalations can cause substantial changes in pressure within the chest cavity. These repetitive changes in the thoracic cavity can damage the heart and lead to atrial fibrillation (an irregular, rapid heartbeat).

Oxidative stress is another effect that sleep apnea can have due to the frequent change in oxygen levels. When you pause in breathing, and then have successful breathing, the flood of oxygen is great for your body, but can lead to oxidative stress. This stress can lead to systemic inflammation and reactions that increase the risk of heart disease.

When to see a doctor

There are so many health concerns with sleep apnea that it's important to know when to reach out to one. Some common symptoms of sleep apnea include frequent, loud snoring or gasping during sleep, reduced breathing or pauses during sleep, daytime sleepiness, dry mouth and headaches when waking, and sexual dysfunction or decreased libido.

Primary care physicians or specialists are all good resources to get a diagnostic test. You can even come and visit our specialists. Simply click the orange button below to take a free online sleep test and get in touch with one of our professionals today!