How Too Much or Too Little Sleep Can Cause Alzheimer's 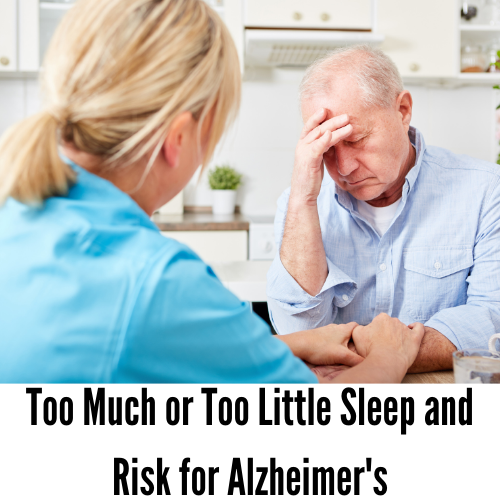 Alzheimer's disease is a neurodegenerative disease that causes dementia. It is characterized by progressive dementia and forgetfulness that progresses to an inability to care for oneself. There is currently no cure for this disease, and several older Americans are currently living with it.

There have been several studies that show there is a strong genetic link in the predictive value of getting Alzheimer's. However a new research article published by the Journal of the American Medical Association (JAMA) has highlighted a link between Alzheimer's and too much or too little sleep. Continue reading to find out if your sleep habits may be putting you at increased risk.

As people age, it is expected that they will experience age-related sleep changes. Hormones start fluctuating, the sleep-wake cycle isn't as robust, and individuals may find it harder to stay asleep for long periods of time.

These age-related sleep changes have been linked with early signs of Alzheimer's disease, depression and cardiovascular disease. This led authors to investigate the relationship between sleep and the development of beta-amyloid proteins.

Beta-amyloid proteins are a diagnostic feature of Alzheimer's disease. They are misfolded proteins that are unable to be broken down and therefore, cause degeneration of brain tissue, beginning with parts of the brain responsible for memory and daily functioning. Eventually the degeneration takes over parts of the brain that are responsible for biological functioning like breathing which leads to death.

This study found that those who are sleeping too little, six hours or less per night, had elevated levels of beta amyloid. This greatly increased the risk for dementia compared to individuals who sleep the normal amount, anywhere from 7-8 hours per night. This suggests that those who are sleeping too little are at a higher risk for developing a pathological amount of beta amyloid proteins. These proteins, if they accumulate to a dangerous level, can cause early-onset dementia, and eventual Alzheimer's.

These individuals also performed moderately to significantly worse on tests used to test for cognitive abilities. These tests include orientation, attention, memory, language, and visual-spatial skills. These tests can identify mild dementia and can be a way to foreshadow increased risk for developing dementia.

Sleeping too little was not the only issue this study observed. Those who slept too much were also at risk for developing Alzheimer's. Although these individuals did not have signs of increased levels of beta-amyloid protein, they did have less executive function than patients who slept about 8 hours.

Those who slept nine or more hours did slightly worse on the Digital symbol Substitution Test than those with normal sleep duration. This test has been used for over a century to evaluate associative learning skills by observing test takers' ability to correctly match symbols to numbers.

Sleep is very important and impacts more than we think it does. Take it seriously, build a routine, and stick to it. The older we get, the more attention we need to pay to our body's needs. if you're having trouble sleeping, or think you're getting too much sleep, then please click the button below and take our free online sleep test!