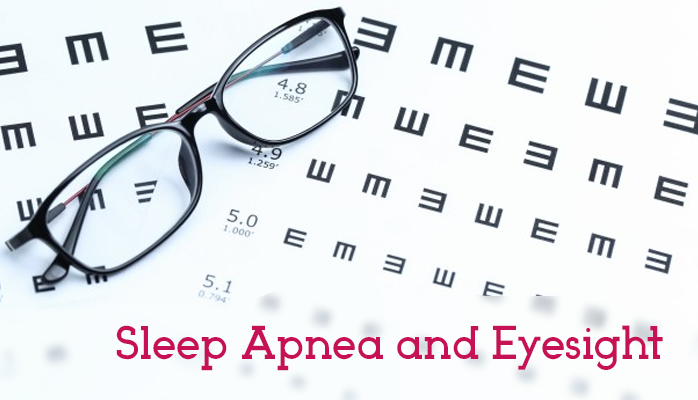 Many individuals diagnosed with sleep apnea are unaware of the fact that their sleep disorder may be impacting their sight. Sleep apnea is clinically defined as a disorder that occurs when a person's breathing is interrupted during sleep. The condition is commonly linked to symptoms such as snoring, sleepiness during the day, morning headaches, waking with a sore throat, waking with choking sensations, and insomnia. However, sleep apnea has also been linked to the development of visual conditions that can impair eyesight.

According to the American Academy of Ophthalmology (AAO), there are five major ocular conditions that can occur due to sleep apnea.

Many individuals who have floppy eyelid syndrome are referred to a sleep specialist for a sleep study due to the direct correlation between FES and sleep apnea. Deepak P. Grover, a neuroopthalmologist associated with the AAO, explains the link between the two conditions as "a decrease in cortical arousability [that] causes the eyelid to remain open when disturbed by mechanical stress during sleep." As time progresses, the eyelid becomes more and more relaxed and takes on a droopy appearance.

Another commonly occurring eye condition caused by sleep apnea is NAION. NAION, an acronym for nonarteritic anterior ischemic optic neuropathy, develops when there is a loss of blood flow to the optic nerve. The optic nerve connects the eye to the brain. Oftentimes, NAION causes sudden vision loss in one eye with no associated pain.

There have been a number of studies finding that as many as 80% of patients with NAION also have obstructive sleep apnea. In most cases, patients first discover that their vision is impaired or lost after waking up in the morning.

Even though individuals who experience vision impairment as a result of NAION cannot recover their sight after the loss, they are able to seek solutions for sleep apnea that can possibly trigger vision loss in their other eye. In 15-18% of NAION cases, those who have the condition eventually lose sight in both eyes.

If someone diagnosed with sleep apnea is also experiencing fleeting disturbances in vision, headaches, vomiting, or a combination of these symptoms, he or she may have an ocular condition called papilledema. Papilledema develops when increased pressure in or around the brain causes part of the optic nerve within the eye to swell.

This condition is associated with sleep apnea because of an increase in carbon dioxide concentration resulting from interrupted breathing while sleeping. This may cause a dilation of blood vessels that increases brain press and leads to optic disc swelling.

Glaucoma is a more widely known disorder wherein there is increased pressure in the eyeball that causes a gradual loss of sight. There are currently more than three million Americans living with glaucoma.

There are several studies that have shown connections between sleep apnea and glaucoma. Although little is known about the relationship, research has proven that those with obstructive sleep apnea have an increased risk of open-angle glaucoma (OAG). Furthermore, individuals with glaucoma have a higher intraocular pressure (IOP), worse visual field indices, and thinner retinal nerve fiber layers compared to those with healthy eyesight (AAO).

Finally, other retinal conditions have been shown to develop in patients who have sleep apnea. One such condition called central serous chorioretinopathy (CSCR) can develop "because of the known increase in catecholamines with obstructive sleep apnea," Dr. Grover explains. "Although CSCR can resolve within six months of treatment, sleep apnea treatment in patients with the condition has been shown to accelerate the recovery."

As neuroopthalmologist Dr. Grover suggests time and time again, seeking treatment for sleep apnea is the most important thing a patient can do if he or she has developed one of the above listed ocular conditions. Due to the fact that sleep apnea may trigger loss of eyesight, getting help from a sleep specialist is the first treatment step to take.

At the Anchorage Sleep Center, there are a number of sleep solutions offered to treat sleep apnea. After an appointment is made, a board certified sleep specialist consults with the patient to select appropriate diagnostic testing. Following assessment, an effective treatment plan is created to best eradicate the symptoms of sleep apnea.

To schedule an initial consultation, contact the Anchorage Sleep Center and begin your journey to sound sleep and better ocular health.