What is Nocturia (Excessive Urination at Night)? 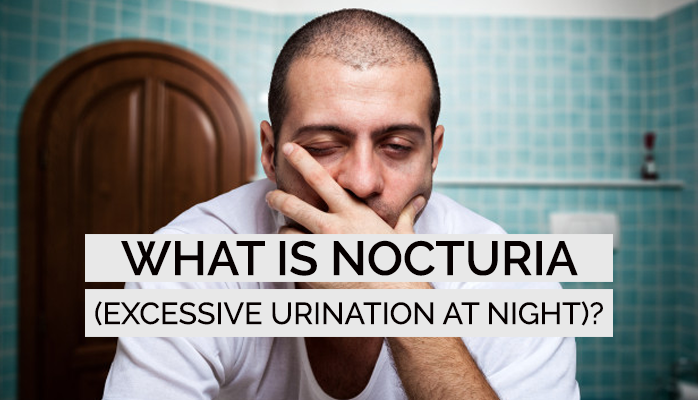 There is a Condition for Frequent Nighttime Urination: Nocturia

Are you waking up several times or more throughout the night to go pee? Is it causing you to feel tired in the morning and sleep deprived throughout the day? It might be validating to know that there is a term for frequently waking up at nigh to urinate: nocturia.

Nocturia is a nuisance, but it’s more than a nuisance too. It leads to sleep deprivation and, jokes aside, it should be taken seriously.

So what is Nocturia? Someone without nocturia will usually go the whole night without having to wake and urinate. At most, if too much alcohol or water was consumed before bed, such people will wake up once. With nocturia, you might way up at least three times, but it’s not uncommon for people to wake up six time or more.

Doing the math, that could be waking up nearly every hour. Here’s what you might expect from waking up from nocturia:

Nocturia symptoms are straight forward: most nights you wake up at least three times during the night and need to urinate.

Some important factors you need to keep tabs on with nocturia are:

Assessing these points is important for:

Keeping a sleep journal will be helpful for this

Nocturia is not the same as bed wetting. Bed wetting does not involve rousing from sleep. Bed wetting may be a natural occurrence, but Nocturia can be caused by a multitude of factors, or a combination of factors, such as:

Let’s look at these causes in more detail.

Nocturia Not a Full-Bladder Problem

Up until recently, people thought that simply have a full bladder was the cause of nocturia. However, many suffering with nocturia can tell you that the urge to pee that wakes them up does not usually translate to actually having much urine to dispel.

While a full bladder can cause nocturia in isolated cases, a full bladder isn’t the cause of chronic nocturia unless you are in the habit of drinking lots of water or alcohol before bed every night.

Natural and Lifestyle Causes of Nocturia

Nocturia can be a naturally occurring condition for biological and lifestyle reasons. Some common examples are:

In the case of lifestyle causes, such as drinking too much water or alcohol, nocturia can usually be treated by cutting out the habit, such as:

Keep a sleep diary if you having trouble with nocturia to see if you can identify lifestyle habits that may be causing it.

There are also numerous medical conditions which can cause nocturia. These include:

For these reasons, if you think you have nocturia you should definitely consult with your doctor.

As discussed, nocturia may be causes by lifestyle factors. However, there are serious medical conditions that can cause it as well. If you are experiencing nocturia, consult your doctor or sleep specialist right away.

Also as discussed, being able to provide the following information to your doctor or sleep specialist will be helpful for them:

Generally, treatment begins with medications, bladder or neurological tests, an ultrasound, or a recommendation to a sleep center for testing. Take this free online sleep test to get started on the road to diagnoses and recovery.