Why Some of Us are Night Owls and Morning People 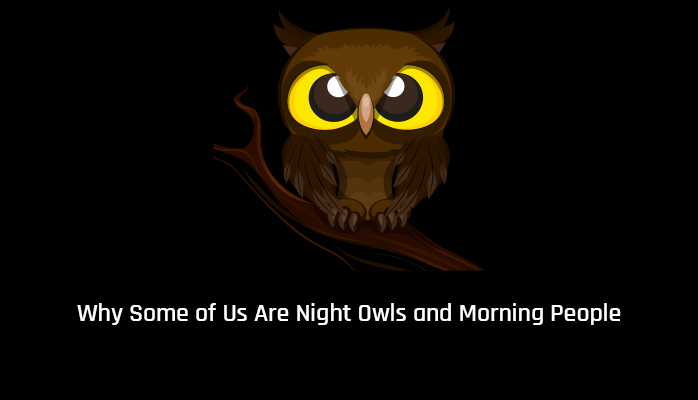 What is the Circadian Rhythm

Your circadian rhythm is your biological clock. It runs in the background of your brain, managing and regulating your sleep-wake cycle. It’s an important understand how and why your body and brain operate the way they do because can be critical to getting a good night’s rest.

Your sleep-wake cycle is the general time that you naturally go to sleep and wake up. Ideally, your circadian rhythm is a 24-hour cycle because this is the cycle modern society is based on, but not everybody functions this way. Your natural sleep cycle may be 22 to 26 hours.

Also, your biological clock may be “shifted” to earlier or later in the day, hence the terms night owl and lark. It’s important to note that research has shown that 40-70 percent of your biological clock is genetic, meaning that while you may be able to shift your clock by a couple of hours, it may be unrealistic to simply adopt a new sleep-wake cycle.

A night owl is someone whose biological clock is naturally shifted to later in the day, meaning that they are a person who:

A night owl may adjust easier to situations like certain shift work. However, being a night owl can be extremely difficult for jobs or school that involve waking up early and those individuals may experience:

Some of us become night owls by conditioning or necessity, like if you have a partner who is naturally a night owl and your sleep cycle shifts closer to theirs.

A lark, or morning person, is someone whose biological clock is shifted to earlier in the day, meaning that they:

Morning people may be less likely to experience insomnia and other circadian rhythm disorders because many jobs and other lifestyle factors operate closer to morning schedules than night owl schedules.

Reason Why You are a Night Owl or Morning Person

As said earlier, about half or more of your biological clock is genetic. Based on the above study, it is supported that natural proclivity for being an earlier-riser or later-nighter is related to anthological history and genetics.

Difference Between Biological Clock and Insomnia

It’s easy to confuse being a night owl with having insomnia. Both involve being unable to sleep a “normal” schedule, and often involve significantly delayed onset of sleep.

In fact, being a night owl who works or goes to school early in the morning very well may lead to primary insomnia. The danger here is sleep deprivation, which has a whole host of symptoms and risks:

If you are worried that you are struggling with insomnia, and you live in Alaska, please take this online sleep test and get in touch with our sleep specialists.