Why Do I Snore? 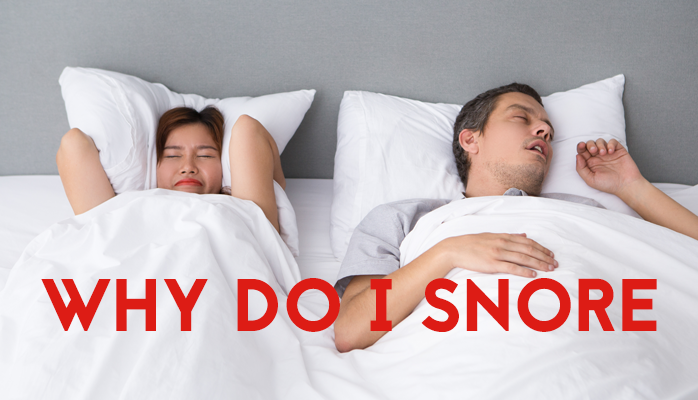 Snoring is a Common Problem

“Honey, stop snoring,” says the wife as she gives her husband a good shove in the middle of the night.

The husband, indignant, rolls over and retorts, “I wasn’t snoring.”

This is a commonly played out bedroom scene that most couples have experienced in the course of their relationship. Some facts about snoring:

In short, if you snore, you’re not alone.

Snoring, defined by the National Sleep Foundation as “noisy breathing during sleep.” Although those most affected are overweight males, all ages and genders are impacted by the side effects of snoring.

The rattling sounds of snoring occur when:

As people age, the throat muscles naturally relax and leads to the phenomenon described above. People who have larger tonsils, adenoids, nasal polyps, or a deviated septum may also be more prone to snoring.

The Side Effects of Snoring

Typically, snoring interrupts the quality of sleep for both the snorer and the snorer’s partner. This leads to daytime fatigue and eventually can lead to poorer daily function and performance and other symptoms.

Many people who are chronic snorers may exhibit the following symptoms:

When these side effects are severe enough to interfere with the quality of life, there’s a good chance that the snorer is suffering from a more serious problem called sleep apnea.

How to Stop Snoring

For those who don’t have sleep apnea and still snore, there are a variety of techniques that can be attempted to improve nighttime snoring.

What is Sleep Apnea?

Those who have been diagnosed with sleep apnea complain of:

These symptoms surface because sleep apnea is a disorder that causes an individual to cease breathing while sleeping. The upper airway repeatedly is blocked during sleep and causes airflow to almost or completely stop.

Luckily, there are a number of treatments for sleep apnea. After a doctor diagnoses someone with sleep apnea by analyzing symptoms, the individual may participate in a sleep study at a sleep center. There, the person will be closely monitored in the areas of sleep state, eye movement, muscle activity, heart rate, respiratory effort, airflow, and blood oxygen levels.

Once diagnosed, many people choose to treat their sleep apnea with a CPAP (continuous positive airway pressure) device. Those using this machine wear a mask that blows air into the airway to keep it open during sleep. If an individual declines the use of a CPAP device, he or she may choose to treat sleep apnea by seeking reconstructive surgery, a dental appliance that positions the jaw and tongue, or by using nasal EPAP (expiratory positive airway pressure).

Final Thought on Why You Snore

Overall, snoring is a completely natural bodily function that easily ignored. However, if snoring becomes too loud or disruptive, it can become a health risk if left untreated. Fortunately, there are numerous treatments available for those who suffer if snoring begins to interfere with the snorer’s quality of life.