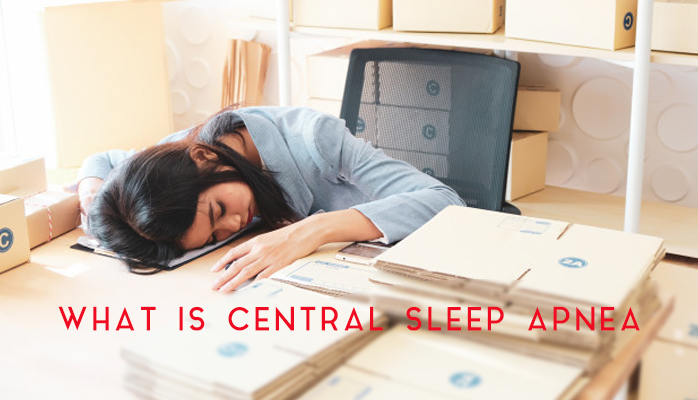 What is Central Sleep Apnea (CSA)

Central sleep apnea (CSA) is a group of conditions in which you repeatedly stop breathing throughout the night because your body ceases sending signals to your lungs to breathe.

When this happens, you repeatedly stop breathing and then wake up to regain breathing (called an “apnea” or “apnea event”). Due to CSA, you may have anywhere from 40 to 100+ apnea events per night. The most common scale used to measure the severity of sleep apnea is number of apneas per hour:

Central sleep apnea can be broken down into several forms:

The primary difference between sleep apnea is this:

On paper this seems pretty clear cut, but in actual clinical practice it is often harder to diagnose this difference.

Another difference is that OSA is much more common and has a much greater number of possible causes.

Outside of this difference, OSA and CSA have a lot of overlap, such as with potential consequences and symptoms.

Symptoms of CSA include [WebMD]:

The main tipoff is frequent pauses for sleep, but this entails having a bed partner to report this. Otherwise, your symptoms may make you or your doctor suspicious that a sleep study would be a good idea for further prognoses. Formal diagnosis of CSA is done through a sleep study.

Side Effects of Central Sleep Apnea

If you live in Alaska, and are concerned that you or a loved one has sleep apnea or has already been diagnosed, please consult with our sleep specialists about any questions you have. You may also start with taking a free online sleep test by clicking below!