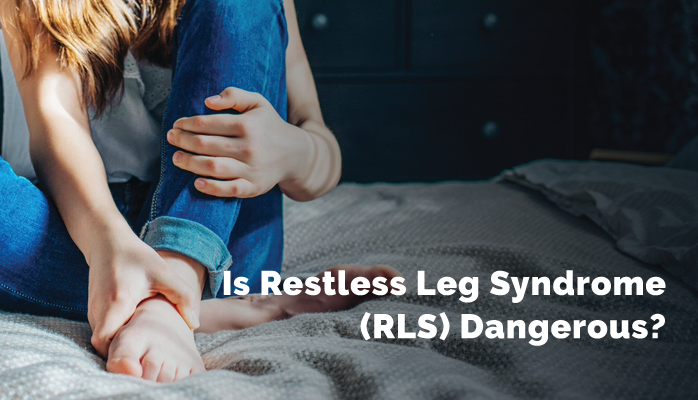 Why RLS is a Problem?

Restless leg syndrome (RLS) is a nervous system disorder that causes uncomfortable feelings in your legs, and other extremities, during the night. RLS can cause enough discomfort to interfere with sleep which is why it is considered a sleep disorder. This discomfort can cause you to wake up and move your legs to ease the discomfort, as well as make it harder to fall asleep.

The good news is that this sleep disorder does not usually require medication and there are things you can do to improve it.

Beyond the side effects of sleep deprivation, there are no long term risks: RLS as a disorder is not dangerous beyond sleep deprivation. However, it is important to know that RLS can be caused by rare underlying causes, which are dangerous. This will be discussed in further detail later in the article.

What are the Symptoms of Restless Leg Syndrome?

The symptoms of RLS all have one thing in common: discomfort mainly in the legs, but sometimes your arms as well. This discomfort can range from mild, to uncomfortable, or even to intolerable.

RLS symptoms may be:

When the discomfort is enough to keep you from falling asleep or wake you up in the night, or interfere with sleep quality, it is considered a sleeping disorder.

Symptoms include feeling the following in your legs (or limbs):

The good news about RLS symptoms is that they are fairly hard to miss in moderate to severe cases.

The above example shows the sleep quality of someone with normal sleep (blue) vs sleep with a sleep disorder such as RLS (red).

RLS may affect up to 10% of the U.S. population [WebMD]. The causes of restless leg syndrome are unknown - however we now know that there are a number of contributing factors, such as:

RLS may go away naturally. In other cases, RLS may be a chronic problem without treatment.