What is Obstructive Sleep Apnea

Sleep apnea is, to put it simply, a term that means your breathing repeatedly stops and starts during sleep. There are three types of sleep apnea – the difference between these types relates to what causes the sleep apnea:

Obstructive sleep apnea is caused when the upper airway becomes blocked during sleep. This blockage greatly reduces or completely stops airflow, and is usually accompanied by loud snoring.

Obstructive sleep apnea occurs when the back of the airway becomes blocked – i.e., there’s an “obstruction” that prevents your breathing. This obstruction can be (1) physical (anatomical features in your mouth such as tonsils) or (2) when the muscles in the back of the throat relax and close as you breathe in.

The obstruction causes sleep apnea in the following domino effect:

This pattern can repeat itself many times over the course of the night, destroying your ability to attain the restful phases of sleep. The physiological and medical root causes of sleep apnea include [U.S. National Library of Medicine]:

It’s not uncommon for a person’s sleep apnea to be caused by multiple, compounding factors listed above.

The main factor driving sleep apnea’s effects on your mood are the side effects of sleep deprivation. Depending on the severity of your obstructive sleep apnea, it can severely inhibit your ability to get restful sleep.

Over time, this sleep deprivation can be a major risk factor for: 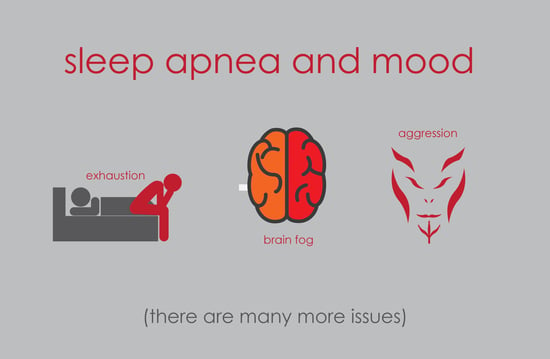 The severity of the symptoms above can range from minor to significantly interfering with your marriage, relationships with friends, ability to perform at work, or stay healthy. The primary compounding factors are:

How to Treat Sleep Apnea

For people who suffer with obstructive sleep apnea, the good news is that there are extremely effective treatment options:

Treating sleep apnea is usually pretty straightforward. CPAP therapy can be 100% effective. Making appropriate lifestyle changes can also make a big difference in the severity of your sleep apnea, such as:

Additionally, persons who are obese or overweight may significantly reduce the severity of their sleep apnea by losing weight. A diagnoses starts with a sleep study or consultation with a sleep doctor.

Get a help for obstructive sleep apnea now